Lenindgrad Zoo is a unique museum of wildlife in the center of St Petersburg. Today it houses more than 600 species of mammals, birds, fish, and invertebrates from various places of Earth.

Leningrad Zoo welcomes visitors all year round. In summer most of the exhibits are open in the outdoor enclosures, while in winter all the cold-sensitive animals are placed into the indoor heated areas available for viewing. There’s a «Riding Circle» here, and your children can ride a horse, a pony or a donkey, or have a ride in the cart. Young visitors are invited to the «Children’s Zoo» where they can see geese, cows, different kinds of chickens, and other farm animals as well as interact with Cameroon pigmy goats that they may stroke, feed them with the Zoo tidbits, and take photos. The Zoo is also a historical and cultural centre. Founded in 1865, it has preserved its original outline and is an important part of the city architecture.

Open all year round Saint-Petersburg’s Dolphinarium is a small marine park that provides people with an educational, enjoyable and unforgettable experience enabling connection with several friendly marine animals. Here your children can have fun while watching dolphins, beluga whales and sea-lions jump out and into the water spin, dance and even draw. And if you want more after the incredible show, you could take pictures and buy some souvenirs. You can even swim with dolphins, but you should organize this activity in advance.

The exhibition at the Doll Museum isn’t just for girls — as well as dolls «from all ages and nations», the museum displays a rich collection of lead soldiers, representing warriors of various eras. It is one of the most comfortable and hospitable places of St Petersburg. It is one of the first private museums in Russia. The museum was founded in 1998 under the direction of the Russian Ethnographic museum. The distinguishing feature of the Dolls Museum is the atmosphere of fairy tales. 8 halls of a constant exposition among which halls of interior dolls, fairy tales, the Russian folklore doll, the toys of the Soviet epoch, traditional ceremonies and festivals of the Eastern slavs. There are also demonstration workshops manufacturing souvenir dolls. You can take part in master classes where you will get the chance to make your own dolls from cloth, straw, paper and other materials. Traditional peasant dolls are surprisingly quick and easy to make, and there is a great variety of other master classes.

To get to the mysterious worlds of dreams, to forget about problems, sorrows! Come to The Bolshoy Saint-Petersburg State Circus with your children. It is the first stone stationary circus of Russia. It was opened on December 26, 1877. It was one of the most beautiful circuses in Europe according to the words of circus actors who had seen quite a few circuses on their roads of European tours. The idea of its construction belonged to the Italian circus perfomer who was a head of a large circus family, circus equestrian and horse trainer Gaetano Ciniselli. He made a big name in Europe of that time. The circus building is a unique engineering structure designed and built on a basis of the state-of-the-art engineering ideas. The decoration of the auditorium is luxurious.

If you have ever wondered how stars and planets are born, what astronomers do during the daytime or even about our place in the universe-visit the Planetarium with you children. A thoroughly entertaining and educational day! The Planetarium was opened in 1959. There are 5 halls: «The star hall», «Observatory», «Space adventure», «Little planet», «Laboratory of funny experiments». Planetarium machine projects 6 thousands stars on the cupola of the star hall — 3 thousand of the nothern hemisphere and 3 thousand of the southern hemisphere, 6 star magnitudes, i.e. of those stars which can be discerned by a human eye in the real sky. The Star Hall of Saint Petersburg Planetarium belongs to one of the largest halls in Russia. The hall’s cupola is 25 m in diameter and 15 m high. It is constructed in such a way, that it cannot be seen from the external side of the building.

The Grand Model of Russia is a private museum in Saint-Petersburg that exhibits a miniature exposition of the vastness of the Russian Federation. It is the second largest model in the world, and the permanent exhibition covers an area of 800 square meters.  It was opened to the public in 2012 and, although has become one of St Petersburg’s most popular attractions, particularly among younger visitors. The museum matches the highest international standards: an exciting interactive exhibition, helpful service, facilities for the disabled, audio guides in 3 languages, a nice cafe with Russian cuisine at reasonable prices, clean modern restrooms and convenient parking. On the interactive part you can see urban and rural scenes that are displayed in perfect and wonderful details in a scale of 1:87. From scenes in St Petersburg to Moscow and across to Siberia and the Far East, the country’s road, the Trans-Siberian railway in its glory and waterways are beautifully crafted. The model is a delight for adults and children alike. Cars and buses stop at changing lights, the impatient overtake and the wirelessly-powered remote control system gives a truly realistic feel. The visitor can also see various models of a naval base, a spaceport, plants and factories, even a shepherd with a flock of sheep and ships at sea. Many of these painstakingly created scenes are interactive, with buttons allowing young visitors to set numerous intricate and entertaining processes in motion.

Spacemen say that the colour of the Earth is blue. And it is hard to doubt — two thirds of the Earth’s surface are covered by water. Mysteries of marine life are very attractive. That is why Public Aquariumin was created in the center of the city. It is a marine museum with the live exhibits — aquatic sphere inhabitants. Some of us dream about the sea shore, but even when you get there you probably don’t expect to encounter a nanny-shark, a moray eel or a dangerous and beautiful fire fish… or anything! Public Aquarium is the place where the most experienced traveler will have his dreams come true. In the Public Aquarium not only the complete immersion into the magical oceanic atmosphere is possible, but also attending an exciting show with sharks and seals (every day except Monday).

One of the most spectacular, and certainly the most kid-friendly, sites to visit in St Petersburg, Russia is the gardens of Peterhof Palace (nicknamed the «Russian Versaille») located just outside the city on the shores of the Gulf of Finland. The palace and its grounds have been named UNESCO World Heritage Sites and are among the most popular tourist attractions in St Petersburg. The palace and the French-style gardens were initially designed by Peter the Great and subsequent generations have added additional fountains to the grounds. One of the most interesting facts about the elaborate display of fountains is that they are operated without pumps. Water from natural springs is collected in reservoirs on the upper level and the force of gravity creates the pressure necessary to operate the fountains on the lower level. If you have kids, they’ll especially enjoy the part of the gardens where stepping on certain stones activates nearby fountains. In Peterhof kids are able to spend a casual afternoon outdoor.

It is located inside a new shopping center near the Gulf of Finland. It is one of the biggest water parks in Russia and the most popular attraction among locals. Here your kids can climb, jump, slide and splash all day long while the parents can just sit and relax. It is made as theme park of the Pirates. The area is 25000 square meters. It includes 5 large slides, several swimming pools and Jacuzzi. There are 13 different saunas and steam baths, a spa-area and a few bars. Piterland offers plenty of entertainment for adults and kids all year round.

The icebreaker is moored off the southern bank of Basil Island. Despite its age, the «Krasin» is still in good working order and eminently seaworthy, but after undergoing extensive restoration work it has now become a floating museum. Designed by the famous Russian seaman, Admiral Stepan O. Makarov and built in 1916 in Britain, the ship was originally named after the Russian mythological warrior — «Svyatogor». Renamed «Krasin» during the Soviet era, the powerful icebreaker took part in the rescue operation to save the Italian polar expedition led by Umberto Nobile. The ship took part in many Arctic expeditions, participating in rescue operations. Visitors can have two types of guided tours. You can go around the vessel and get acquainted with the life and work of Arctic heroes, and you can explore engine room. Needless to say, this type of tour is especially interesting for boys and tomboys.

Railway Museum is especially popular among boys. The museum presents items that show the history of railway in Russia, models of old and state-of-the-art locomotives. It is definitely the country’s best museum representing the complete development of railways in Russia and the former USSR. Children of all ages love to take part in the development, operating and running of the modern trains as they depict the operations of real railroads.

Kunstkamera — Peter the Great museum of Anthropology and Ethnography.

It is the first museum of Russia established by Peter the Great. It is a scholarly center of an international fame. Inside you can find great anthropological and archeological collections as well as a weird, but interesting collection of curiosities collected by Peter. The collection is extremely popular among children.

The workshop of Matryoshka doll

The matryoshka doll is a symbol of Russia and its culture. It is truly a doll — a child’s plaything — but it began its history just over 100 years ago as a highly collectible art form. The matryoshka doll (or, simply, the matryoshka) is a nested doll with two halves that can be pulled apart. The painted image on the dolls is most often a woman wearing traditional Russian costume. The woman is a mother; the names Matryona and Matryoshka were common Russian country names for generations. Both come from the Latin root mater for mother. So matryoshka has come to mean «little mother» based on the idea that the outer or largest doll holds her babies inside like an expectant mother and that each daughter in turn becomes a mother. They are symbols of fertility and motherhood and have a modified egg shape. In the workshop, kids will design, paint and decorate their own series of 3 Russian Nesting Dolls, and learn about the Russian tradition of Matryoshka! All materials are included.

You can choose one of our celebrity shore excursions in St Petersburg for cruise ship passengers or create your own. Just fill out the form on the contact page. 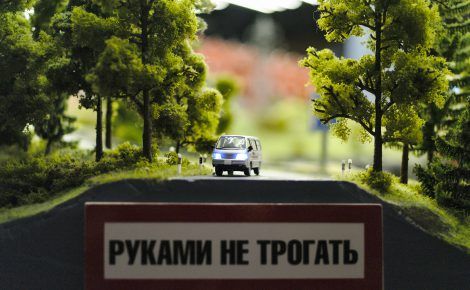 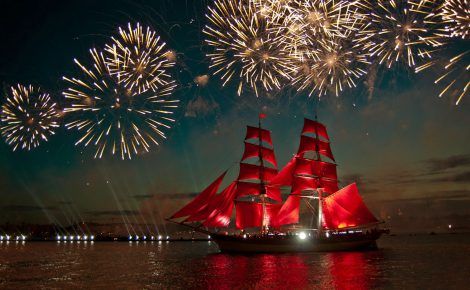 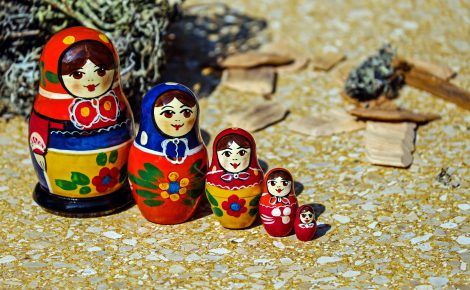 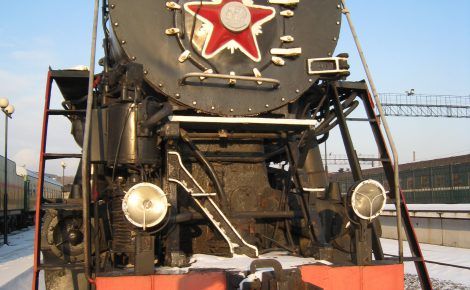